Over the weekend, my favorite fella and I hosted a gluten-free beer tasting. Ten friends gathered on a chilly evening in our little house to try out nine varieties of beer and one hard cider, all naturally gluten-free. Want to see what we sampled? 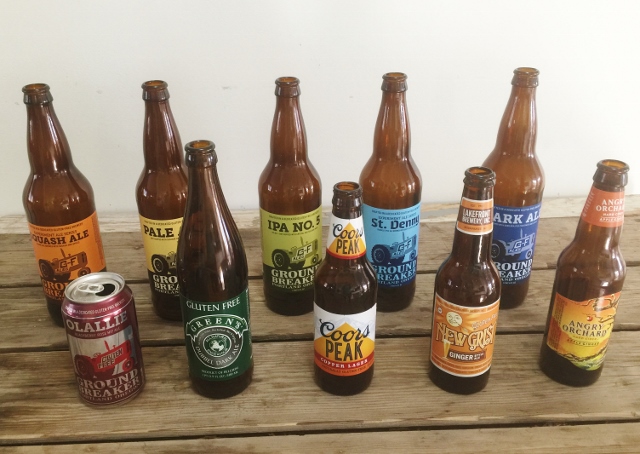 Disclosure: I was provided with samples of Coors Peak Copper Lager (no longer available) and an extensive variety of Ground Breaker Brewing beer.  All other beer, food and supplies were purchased by me. The opinions in this post include mine, as well as those of friends who were not aware of what I purchased and what had been provided at no charge. I was not asked by any of the participating companies to write about this, but by golly, I’m going to. Because you need to know about gluten-free beer…

I am not a beer drinker. I much prefer hard cider (or so I thought before this beer tasting). I married a beer drinker, but he would rather have bourbon or a hard cider most days, occasionally having a beer away from home.  Because neither of us are really savvy about beer, we invited friends over who are.

Speaking of those friends, they were the impetus for hosting a gluten-free beer tasting. In the group of friends we invited over were two friends who have been quite beer savvy in their gluten-full past.  Now that gluten has been kicked to the curb, they’ve repeatedly mentioned missing beer.  So I decided we needed to fix this, we had to find good gluten-free beer. Also in attendance last night were friends who do not need to be gluten-free and are craft beer fans, hardcore enthusiasts with apps on their phone to track what they’ve sampled, extensive collections of beer bottle labels representing years of collecting and sampling. So we were split right down the middle, about half of us living life gluten-free and half not gluten-free but interested in tasting gluten-free beer and sharing thoughts. 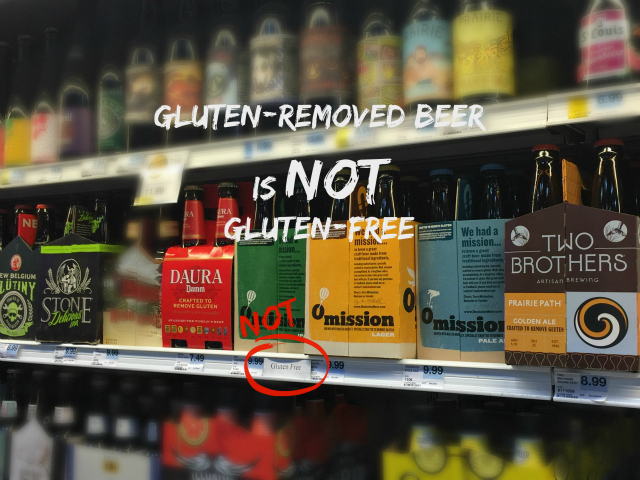 How does one host a gluten-free beer tasting?  Well, first you round up the beer.  See this shelf pictured above, labeled gluten-free?  Skip this beer.  It’s not really gluten-free. It’s gluten-removed, which means it was brewed with gluten grains and then treated with an enzyme they think might remove some of the gluten.  You see, there is no test that accurately determines how much gluten is in a fermented liquid.  We don’t really know what the gluten content is and plenty of folks who can’t have gluten get sick from these beers. Best to avoid them.

Instead, go with beer that is made with only naturally gluten-free ingredients, like these: 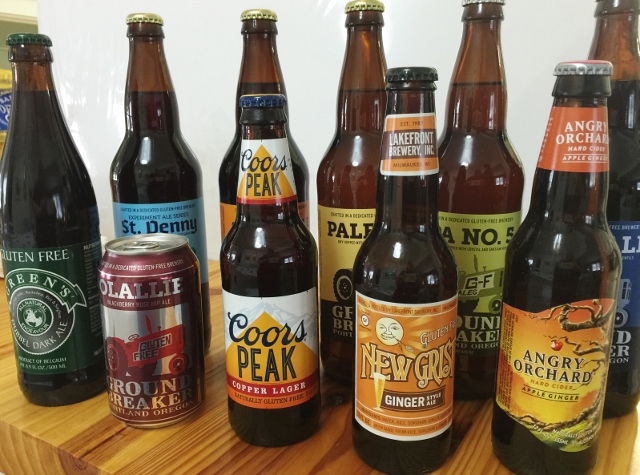 Second, buy lots and lots of glasses. Not plastic, my beer savvy friends said, buy glass. These 5-ounce juice glasses did the trick. 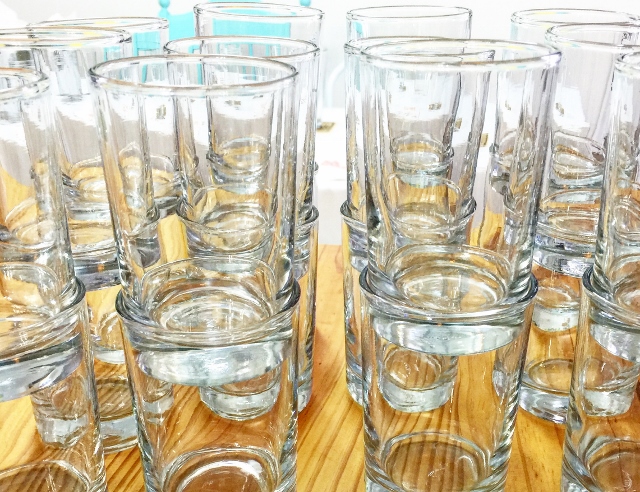 Third, give your guests a way to jot down any thoughts about the beer we sampled. 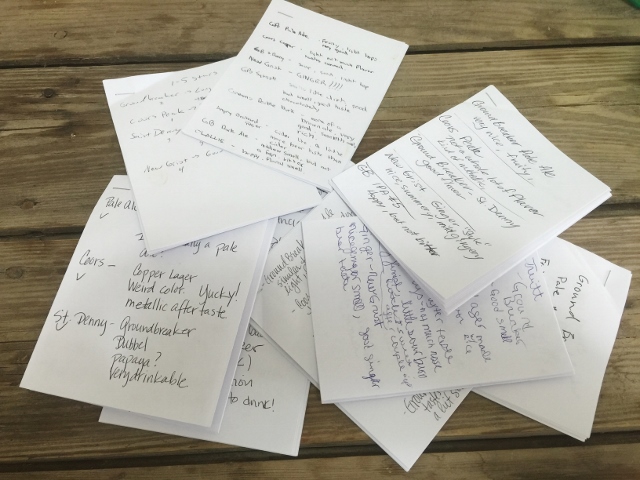 Fourth, have a selection of snacks available. Bowls of my Sweet Ginger Sriracha Cashews, pretzels, salt and pepper pistachios and popcorn lined the sampling table. I also set out a cheese tray with both dairy and non-dairy options, crackers, chips, veggies and three varieties of hummus, plus these cookies made into little bite size nuggets.  The favorite snack of the night was definitely Pizza Bombs made with this recipe from Shirley of Gluten-Free Easily. 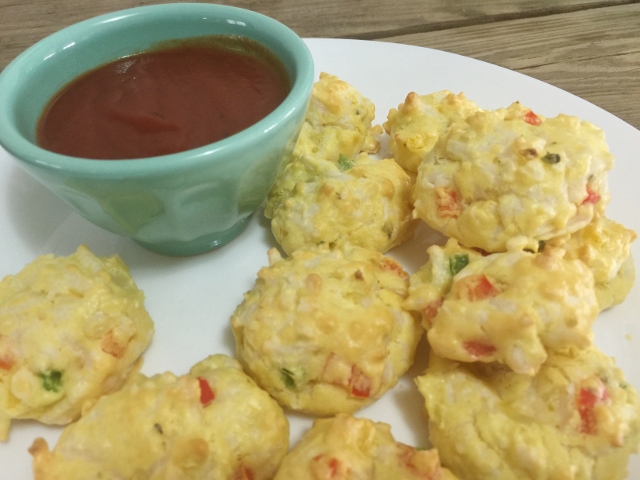 Those beer comments I mentioned above?  Let’s take a look at what we sampled, a tidbit of info from the brewery for each one and then brutally honest comments from our guests… 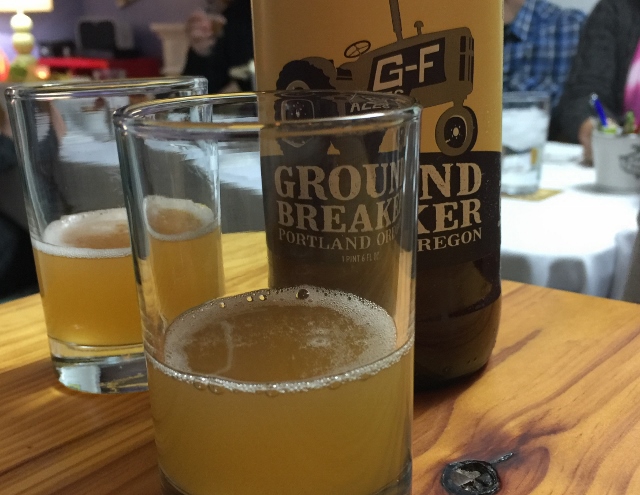 Ground Breaker Pale Ale: 30 IBU 5.8% ABV “Pale Ale is brewed to be bright and crisp. We dry hop with Cascade and Meridian hops to provide a floral armoa with elements of citrus and pine.” 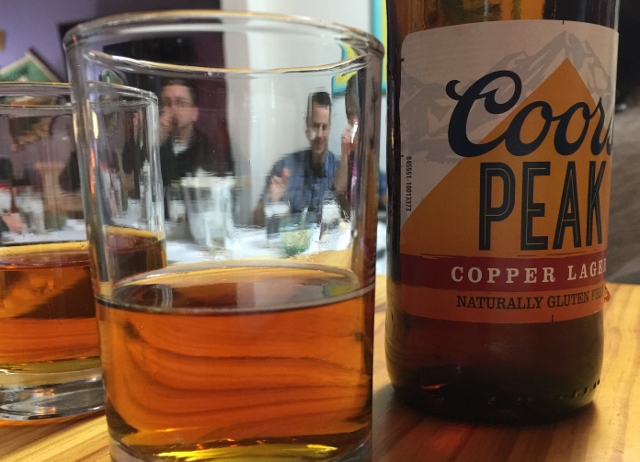 Coors Peak Copper Lager 4.7% ABV (no longer available, discontinued by Coors after being tested in a very narrow test market) “There’s no need to remove gluten from Coors Peak, because it’s simply never there.  The barley used in traditional beers is replaced with American brown rice, brown rice malt and pure pea protein, so our beer is naturally free of gluten.  The result is a smooth an full flavored copper lager with a balanced, malty, slight caramel profile that is offset by subtle hops.  The finish is crisp, clean and perfectly balanced.”

This one is tricky to properly review. Please keep in mind my guests included craft beer enthusiasts, folks who wouldn’t normally drink a mass market beer like Coors. That said, this beer fits a niche in the gluten-free beer market and we will hopefully see it on the shelves across the country. Those who have enjoyed beer like Coors in the past but want a gluten-free alternative will enjoy this. Beer like this would have been on my shopping list in college and for summer concert tailgating. You with me on this? 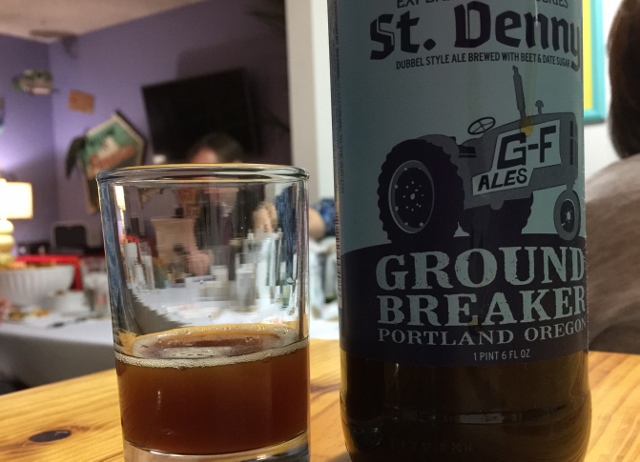 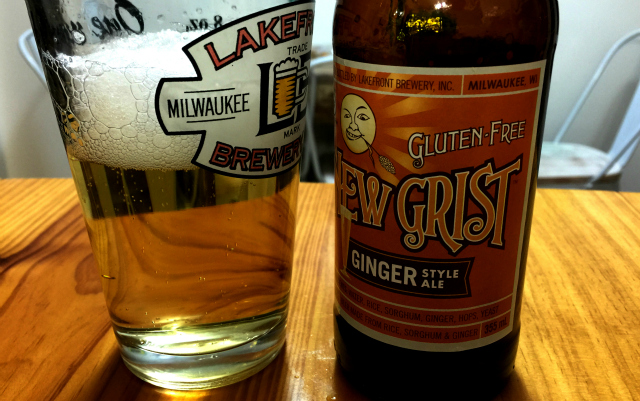 *Before I share the comments from our guests, I have to tell you I cannot be objective about this beer.  Last Summer I visited Lakefront Brewery in Milwaukee, the makers of New Grist gluten-free beer.  I had a gluten-free beer while my friends had “regular” beer in the beer hall. I had food that was safe for me to eat, my friends had food they enjoyed. It was a fun afternoon. But what really impresses me about New Grist?  They were the FIRST gluten-free beer to be allowed to use the word “beer” on their label.  They took the initiative to petition the ATF for the right to use the word beer on a product made without the previously required 25% malted barley.  Folks, this was way back in 2006. Early on the folks at Lakefront/New Grist were looking out for the gluten-free community and I’m really grateful for that. The ginger variety of their gluten-free beer isn’t available near me, but I made a lengthy drive to obtain it for this tasting. *

In the middle of tasting all of the beer, I slipped a hard cider into the tasting.  I chose Angry Orchard’s Apple Ginger because several friends have commented on a slight beer flavor in this hard cider.  I’m in agreement with them; this is one variety of Angry Orchard I don’t usually buy because it reminds me of beer.  Well, guess what?  It tastes nothing like beer when intermingled with beer. Foiled!

Ground Breaker IPA No. 5, 60 IBU, 5.6% ABV “IPA No. 5 is brewed with roasted chestnuts, roasted lentils, and Belgian-style candi sugar. Crystal and Santiam hops are used during the boil and for dry-hopping. Crystal hops bring the classic Northwest IPA pine and citrus notes while Santiam adds hints of tropical and stone fruits.” 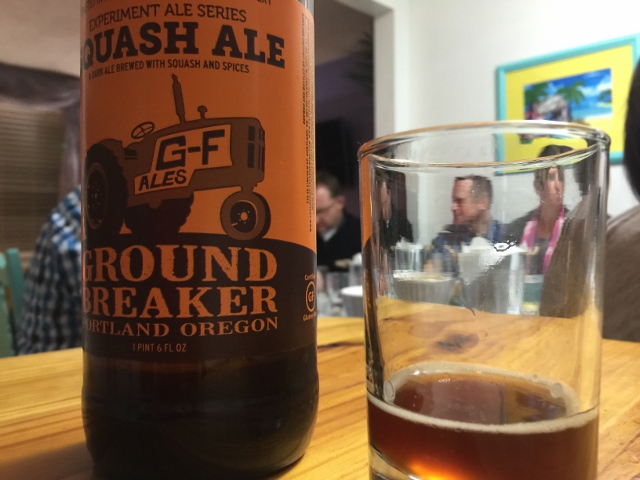 Ground Breaker Squash Ale, 30 IBU, 5.7% ABV “During production, pumpkin seeds are toasted, crushed, and added to the mash. Squash Ale is then ‘triple squashed’ with added squash in the mash tun, kettle, and fermenter. The fermenter addition consists of squash that has been slow roasted for several days into a squash butter. A gentle addition of cinnamon, nutmeg, and toasted coriander has been added to complement the squash flavors and aromas.”

This beer was blind-tested, meaning it wasn’t revealed what it was until after the first few sips. I wanted everyone to have an open mind, because squash, in beer?!?  If you are reading this, you won’t have the benefit of blind tasting but I wish you could.  For my Kansas City/Midwest friends, I have to tell you there were many comments made comparing this to Boulevard’s Chocolate Ale, which is a gluten-full beer. Several said Ground Breaker’s Squash Ale is a better alternative. It was around this point in the tasting when a few of us started planning a trip to Portland to visit Ground Breaker. Plane tickets may have been purchased…

We took a little break to refresh snacks at this point, stretch our legs, wash glasses. It wasn’t long though before we were back at it, closely inspecting the next two beers in the tasting: Green’s Dubble Dark and Ground Breaker Dark Ale.  For those who have followed along on my baking adventures, you know I’m a fan of Green’s in my Chocolate Ale Cupcakes. Turns out it is great in a glass, too. 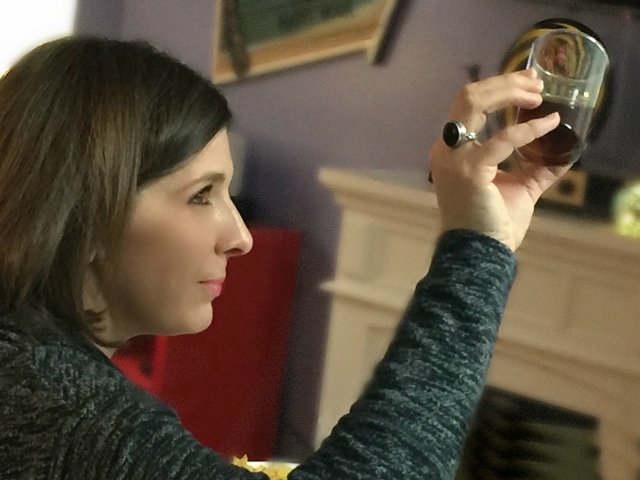 (Ground Breaker Dark Ale on the left, Green’s Dubble Dark on the right) 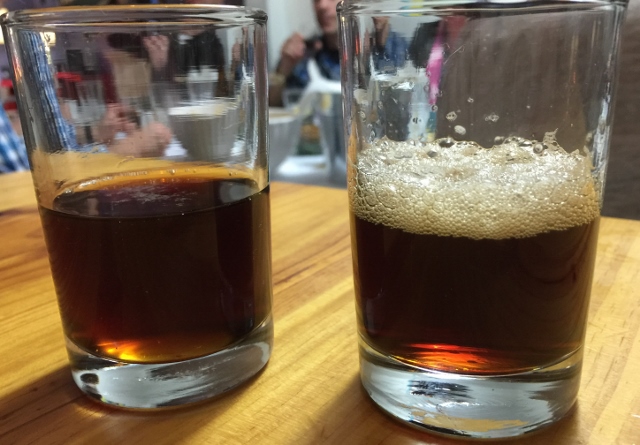 Green’s Dubble Dark Ale, 7.0% ABV “Green’s was founded in 2004 to brew full-flavored beers without barley or wheat, so beer lovers with gluten intolerance, also known as celiac disease, could enjoy them. The beers are brewed at Andelot DeProef Browerij, in Lochristi, Belgium. Made from millet, sorghum, rice, and buckwheat, as well as classic hop varieties, they are fermented with a traditional Belgian yeast strain and bottle-conditioned.” (This was the only imported beer we sampled.)

And one last beer for the evening… 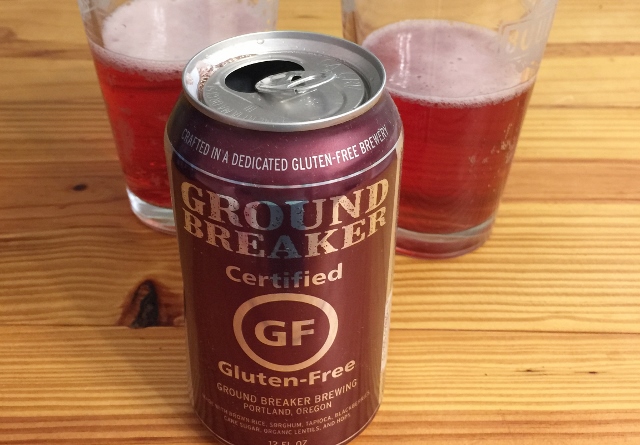 Ground Breaker Olallie, 30 IBU, 4.5% ABV  “Olallie is brewed with blackberries and rose hips and then finished with copious amounts of Crystal hops for a classic Northwest aroma.  At the same time Olallie has been kept light and dry with only a hint of bitterness.”

Here’s my full disclosure on this. I’ve refrained from much commenting on the other beers because I’m not a beer drinker. That said, I really like this one. When the FedEx man came by with the box of beer from Ground Breaker, it was so cold out, maybe around 20 degrees.  He delivered a box of pre-chilled beer to me right around noon on a weekday.  No shame in telling you that I popped open a can of Olallie right away. And then I had a hard time not opening the others, saving them for the beer tasting. I like this a lot. But I’m not usually a beer drinker.  Oh, Ground Breaker, what are you doing to me?!? While not completely alone in how much I like this, we were in the minority. This wasn’t the favorite for most of our guests.  Which is fine by me, I’ll take what they don’t want. 😉

You’ve gathered by now there were some clear winners and some that were not well-received.  The important thing to note is that those who were really missing beer since going gluten-free found options that will meet their desire to have a beer without the risk of ingesting gluten. That was the goal for the evening: finding gluten-free beer that is every bit as good as the gluten-full counterpart. 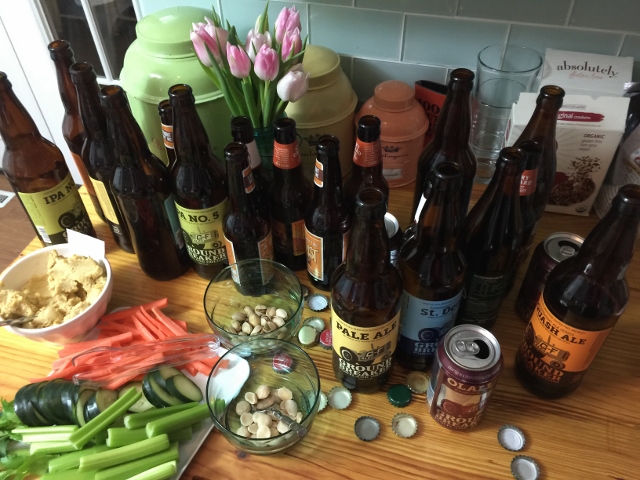 We wrapped up the night late, snacks well picked over, the good stuff devoured.  A couple extra bottles of beer were opened and shared by the stragglers. Life’s great dilemmas were discussed, but for a change we had an answer to one of them: YES, there is good gluten-free beer.

Another BIG thanks for Coors and Groundbreaker Brewing for sending beer for us to sample. I’m grateful to both of them for creating a product that fits a need in the gluten-free community, as well as the other brewers committed to making beer that can be safely enjoyed by those with Celiac disease, non-Celiac gluten sensitivity and other conditions which require the absence of gluten. Cheers, Santé, Prost, Salud for gluten-free (not gluten-removed) beer!

PLEASE drink responsibly. Don’t drink and drive. Make a plan to get your tipsy self home, Uber, walk, stay over. I’m rarely stern on my site, but this is one cause that I’ll be stern about. Don’t get behind the wheel or put yourself in a risky situation if you’ve been over-served. Ok? Thanks.

« CALL TO ACTION: Your Input Is Requested By The FDA on Gluten-Free Issues
Summer Music Festivals: All of the Fun with Zero Food Worries »