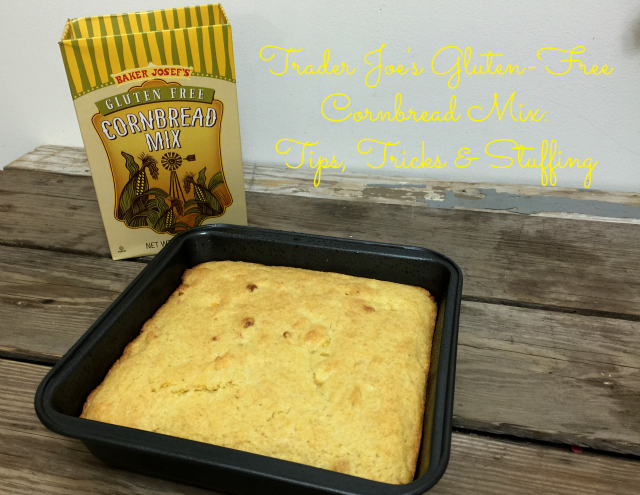 If you are a long-time reader here, you know I rarely use a mix. I really enjoy from-scratch baking. But once in awhile, a mix hits the spot.

When my sweet friend Patricia told me that gluten-free cornbread mix at Trader Joe’s was to die for, I gave in. I bought several boxes hoping to use it for Thanksgiving stuffing.

Here’s the scoop on this cornbread: 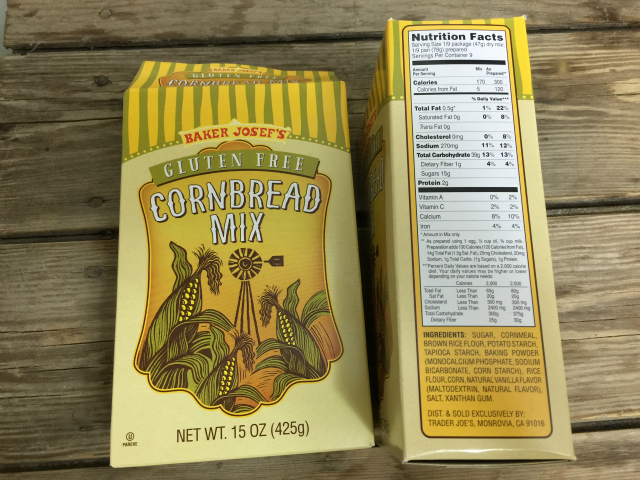 First up, I baked this mix according to the directions.  Well, mostly. I did use non-dairy milk because we don’t keep dairy milk handy.  I used an unsweetened almond/coconut milk blend, grapeseed oil and one extra large egg from our backyard chickens.

When made according to the directions, it is light, fluffy and a bit crumbly.

We enjoyed this with a bowl of chili.  There are actual pieces of corn in this mix and a bit of sweetness, which worked well with a very spicy bowl of chili.

While it would work to make cornbread stuffing for Thanksgiving, I would read on and choose one of the alternatives I prepared…

Second up, I used pumpkin instead of oil.  The recipe calls for 1/2 cup of oil. If replacing oil with pumpkin in a recipe, I reduce the amount to 75%.  In this case, that would be 1/3 cup plus 1 Tablespoon of pumpkin puree. I used the same unsweetened almond/coconut milk and one extra large egg.

When using the pumpkin instead of oil, it is not quite as crumbly as the batch made according to directions. This makes it a potential candidate for stuffing.  There is just a hint of pumpkin flavor and a bit of a softer texture, making it more cake-like.  If not for the color, I doubt most would know it contained pumpkin.

Third, I made the recipe vegan. No dairy, no eggs.  Instead of an egg I made a chia slurry by combining 1 Tablespoon chia seeds with 3 Tablespoons hot water and allowed it to sit until it became thick and gel-like. I used the 1/3 cup plus 1 Tablespoon pumpkin puree substitute for oil and the same dairy-free milk.

The result with a chia “egg” and pumpkin instead of oil:  dense, a bit chewy, perfect for stuffing! I’m going to cube this batch and allow it to dry out for a day before turning it into the best cornbread stuffing ever. 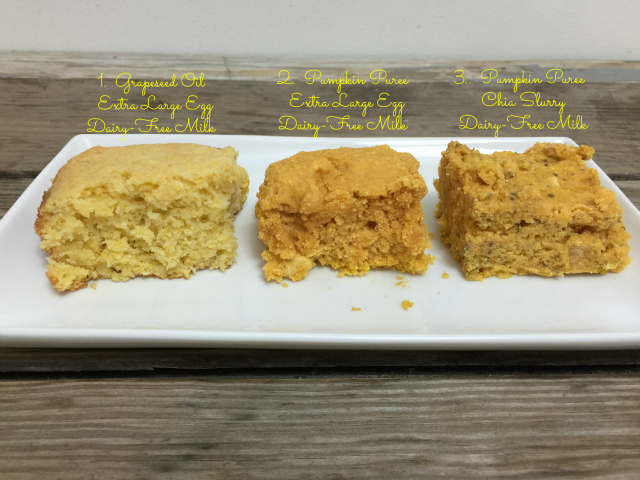 To recap: #1 is great with chili, #2 good enough to be dessert, #3 ideal for stuffing.  All were delicious!

So am I forever swayed away from scratch baking?  No, not a chance.  But for a day that is as busy as Thanksgiving, I’ll definitely consider using the Trader Joe’s gluten-free cornbread mix. It is three bucks well spent. How about you?